Zephie is a young scissor-lift chugger. She was introduced in Season 1.

Zephie is a very kind scissor lift trolley who is good friends with the trainees Koko, Wilson and Brewster. She is really useful around Chuggington as she can spin around 360 degrees and zoom up and down to manoeuvre her cab as she is a scissor-lift trolley Train. Eddie often uses Zephie to help him get to hard to reach places and she zips around the depot running errands for Morgan. Zephie is fitted with a bell but in one of the episodes she has some fun with her newly fitted siren! Zephie giggles through life and although she can be a little coy, excitable and childish she knows the importance of hard work.

Zephie is loosely based on an early San Diego cable car, which can not spin around 360 degrees as this is an unrealistic feature. The spinning function may have come from a Manchester horse drawn tram. It had the ability to turn 180 degrees at terminal. The spinning feature may also have been inspired by certain North American track inspection cars ("speeders"), such as certain versions of the Fairmont P-5, which are equipped with a drop down lifting pivot. In such cars a central foot is dropped between the rails from the centre of the car, raising the entire machine (including the wheels) off the rails, and enabling the operator to spin the entire car around by hand. 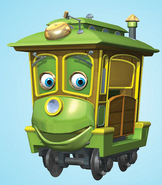 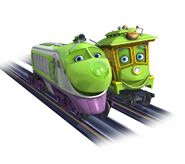 Zephie's Basis
Add a photo to this gallery 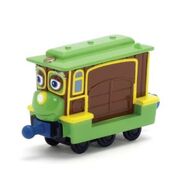 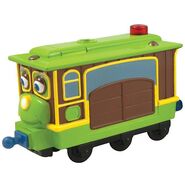 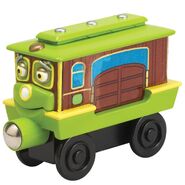 Plarail
Add a photo to this gallery
Retrieved from "https://chuggington.fandom.com/wiki/Zephie?oldid=30683"
Community content is available under CC-BY-SA unless otherwise noted.