12
Zack is the head leader of the Chuggineers. He was first introduced in Season 4.

Zack joins Chuggington to head up the Chuggineers. This foreman is organised, hard-working and extremely safety consious, making him the perfect leader of the Chuggineer crew and mentor to Brewster. Joined by his fellow team members Tyne and Fletch, this engineering team are responsible for all the heavy lifting, loading and building of bridges, tunnels, stations as well as laying track and making repairs.

Zack is based on a GE Dash 9-44CWL diesel-electric hybrid engine.

Plans for Zach’s color palette (Note. Zack is referred to as Mack)
Add a photo to this gallery

Zack at the Docks with Skipper Stu and Hamish

Zack with Brewster
Add a photo to this gallery 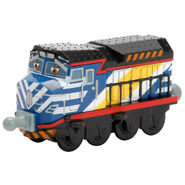 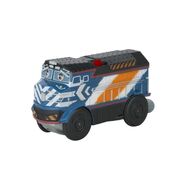 Jazwares
Add a photo to this gallery