Chuggington
Vee is the main announcer at Chuggington who informs the engines on what to do. Vee has a warm voice and has the important role of keeping Chuggington running on time and on schedule. She has loudspeaker poles placed almost everywhere, and in the depot can be interchanged or moved around on various blue pedestals.

Vee is a motherly, caring figure with a soft spot for the trainees; always ensuring they understand her instructions and always on hand to help. This requires a great deal of patience sometimes; answering Brewster's endless questions and double-checking that Wilson is paying attention. Vee is usually the first to pick up on anything going wrong - or right, for that matter, and always congratulates the trainees on a job well done.

Vee is a self-aware AI, and can be stern at chuggers who misbehave, but always gives them advice and teaching. 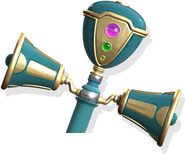 Trading cars (back)
Add a photo to this gallery
Retrieved from "https://chuggington.fandom.com/wiki/Vee?oldid=37383"
Community content is available under CC-BY-SA unless otherwise noted.