Vee
The Roundhouses are a group of sheds located at the Depot. Emery and Decka's line runs through here.

There are five roundhouses- there are four single deck roundhouses (one reserved specifically for trainees), and a large double decker roundhouse. There are a lot of unused berths to allow space for new chuggers in the future.

While the roundhouse lack much significance other than being a place for the chuggers to sleep, some events have taken place here; most notably when Hoot and Toot tried to launch a meteorite back into space, it ended up smashing into all of the trainee’s roundhouses- luckily, the trainees, who were sleeping, were unhurt.

Right to left, the order is:

In Chugging Home for the Holidays, Rosa was seen residing in Mtambo's berth.

The order of this roundhouse, up until Season 6 went as follows from left to right:

As of Season 6, the order from left to right is:

In The Zephie Express, Rosa was seen residing in Piper's berth.

No one has seen to be sleeping in this roundhouse since Season 4; however, Hodge was briefly seen entering it in the Discover Chuggington: All Aboard! short, The Roundhouse Song.

Not dissimilar to the Back-Right Roundhouse, no one has seen to be sleeping in this roundhouse since Season 4; however, Cormac was briefly seen entering it in the Discover Chuggington: All Aboard! short, The Roundhouse Song, even if he has been shown to sleep in the Double-Decker Roundhouse.

Wilson, Koko and Brewster behind the roundhouse 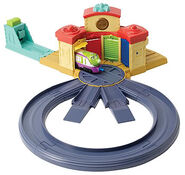 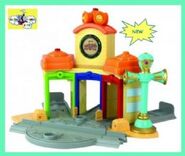 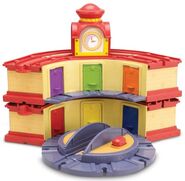 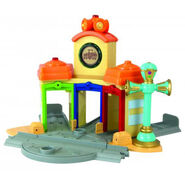 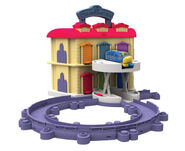