The 3 Ways of the Track

Tai is a trainee shunter introduced in Season 6. [1] She originally worked at the freight yard of Zheng-Chu, and now works with Skipper Stu and Hamish at the Docks.

Tai originated from the foreign city of Zheng-Chu, in which she worked at the large freight yard where a number of container goods are sorted daily. At some point prior to her introduction, Tai would move to the Chuggington harbor, to assist Skipper Stu and Hamish with their work.

While on an important shunting job, Tai ended up damaging her exhaust pipe while trying to move a heavy container of anchors. Upon seeing Hanzo's skills and another accident with a container and sand wagon colliding, Tai decided to take on his offer to learn "the three ways of the track", those being breathing, balance and focus. Despite having a little trouble learning the skills, she soon impressed the other chuggers at the Docks by moving the containers with ease. [2]

After some consideration from Skipper Stu, Tai was sent out on her first deliveries around Chuggington. Unfortunately, her lack of knowledge on the routes lead to her being late with the ice for Frostini, a number of parts to repair the CPHQ turntable that had begun spinning out of control (with Asher trapped on it), and a timer for the Chug-a-Sonic Speed Track. Wilson and Koko would attempt to help her by painting the tracks with coloured lines to help her, but they ultimately washed away due to a rainstorm while delivering beams to repair the Rocky Ridge Rickety Bridge. Realizing she truly needed directions, she returned to the Docks and was offered help from Brewster, who accompanied her to help deliver the beams and repair the bridge. [3]

As a result of becoming tired of constantly being stuck at the Docks, Tai would accompany the Wilson, Brewster and Koko with their duties for the day. [4] Additionally, Tai would team up with Rosa to compete against Emery and Hodge during the Rip Roaring Relay Race, of with the former two would win. [5]

In preparation for Skipper Stu's anniversary, Brewster ordered a special anchor for him; however, he did not realise that the ship would be arriving at the Docks while Skipper Stu was present. In an attempt to keep the gift a secret, the trainees took on their spy personas to retrieve it, with Tai joining them during the mission. [6]

Tai was briefly put in charge of the Drop and Load Yard while Cormac was at the Repair Shed getting his prongs fixed. Tai attempted to try stacking the way she used to practice in Zheng-Chu, known as Chug Shui; unfortunately, Cormac (being quite the perfectionist) became determined to keep things his way. After a minor accident, the two chuggers made peace, with Cormac learning that doing things differently was not as bad as it seemed. [7]

Having lived in two cities, Tai has obtained much shunting experience. She is incredibly tough, strong, and has a can-do attitude- always striving to get the job done. Despite this, Tai has shown to have too much faith in her beliefs, evident by her being hesitant to ask for directions and eventually taking on a slightly different mindset from Hanzo. Even so, Tai is very flexible and willing to adapt to new environments and skills.

Additionally, Tai is understanding and is reasonable with other chuggers in difficult situations. For example, when Brewster became jealous of Tai after she received his title as the strongest trainee (which would lead to the two becoming trapped in a rockslide) Tai saw how much Brewster cared about his strength and encouraged him to do his best regardless of his significance. [8] In all, Tai is a trainee as tough as nails with a heart of gold, who, while can be hesitant to swallow her pride, knows what is best to do.

Tai, being a modification of Calley, is loosely based on a Krauss-Maffei ML 500 C diesel hydraulic shunter which were built in Germany.

Tai is painted purple with orange stripes and paintwork. Her window frames and handrails are additionally grey.

The 3 Ways of the Track promo 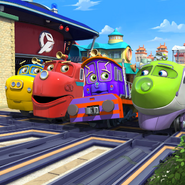 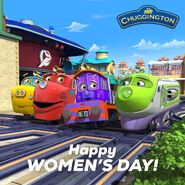 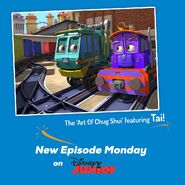