My Hero
Slow Coach Koko is the first episode of Season 6.

Koko's confidence is shaken after she gets in an accident. Scared and second guessing herself, can she regain her speed in time to save Wilson and Brewster from trouble? 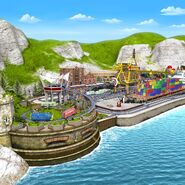 Add a photo to this gallery
Retrieved from "https://chuggington.fandom.com/wiki/Slow_Coach_Koko?oldid=36192"
Community content is available under CC-BY-SA unless otherwise noted.