Sinkhole Rescue is the second episode of Season 5.

Wilson and Brewster are practicing with their wagons when the ground collapses under Brewster- can Wilson save him in time?

Calley brings Wilson to the countryside to help him master certain Chug Patrol wagons in different ways; everything goes smoothly, but Wilson can't seem to master CP7- the net shooter car, and after becoming frustrated wishes that he could learn a completely new wagon. Meanwhile, the Chuggineers are replacing the track at the old power station, and Brewster brings some of the old track with him to help him practice.

Brewster tries to help Wilson learn CP7 by having him aim at his wheels, but Brewster moves too far back and the ground collapses. Wilson uses CP7 and shoots some nets on the collapsing ground to hold Brewster, but they won't stick- thus, Brewster quickly teaches Wilson how to use the Chuggineer magnet car. Wilson is able to lay enough track to reach Brewster, and after much pulling, brings him to safety.

Calley, Zack and Fletch all arrive at the scene from the Foundry, to which they are shocked at what they see. Zack congratulates Brewster for his great find, and Wilson realizes that in the end, he was able to learn a new wagon. 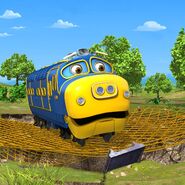 Add a photo to this gallery
Retrieved from "https://chuggington.fandom.com/wiki/Sinkhole_Rescue?oldid=33444"
Community content is available under CC-BY-SA unless otherwise noted.