TBA
A sixth season of Chuggington (subtitled Tales from the Rails) is currently in production for delivery and is being released as of Summer 2020.[1] It is the first season to be produced by Herschend Entertainment Studios, following their purchase of Ludorum. Michael G. Stern (Doc McStuffins, Sofia the First, Jake and the Neverland Pirates) serves as both head writer and co-executive producer, while Julie Phillips (VP of H.E.S.) serves as co-executive producer. Sarah Ball returns as a supervising director and voice director.

The new season has "a fresh approach with new formats, elements, and storytelling styles."[2] New characters, expanded locations, and a musical soundtrack will be added, with some episodes being standalone, while others will be written to make up larger story arcs.[3]

Prior to the new season, a series of 26 1.5-minute live action/animated hybrid shorts titled Discover Chuggington: All Aboard! where "live action kids globally will journey into the animated world of Chuggington" was produced to "to allow for increased audience interaction with the world and characters of Chuggington." The new series premiered on April 13th, 2020 in the US.[4]

The series is "being developed in partnership with Alpha Group and leadership from the broader [Herschend Enterprises] family of businesses to ensure an organic 360 franchise for the relaunch."[5]

The new season (52 x 10’) is all about discovery, getting to know the unique characters and the inner workings of the locations that make Chuggington so special. It’s a fresh celebration of the diversity, friendships, and adventures that have delighted audiences for the past ten years. To top it off, live action kids globally will journey into the animated world of Chuggington through an all-new hybrid live action / animated short format (26 x 1.5’)."[10]

"Let’s train together with Wilson, Koko, and Brewster as they ride the rails on exciting, new adventures of teamwork, friendship, and fun. Chug deep into unique locations like Safari Park, the Docks, Chug Patrol HQ, and the Ice Cream Factory to explore the dynamic world of Chuggington that’s home to a diverse and playful community of trains. Board relatable journeys full of humor, action, and heart, accompanied by train-tastic new songs!"

In addition to forty-six episodes, two half-hour specials will also premiere as part of the season.[11]

From Discover Chuggington: All Aboard

In addition to Alpha Group's new toyline, a massive marketing effort is being put in for Season 6. As stated in a press release, "the brand reintroduction will also be supported with refreshed and all new creative assets, a special minihub website (launched February 2020, with the kids' site set for a March 30th launch), broadcaster support, direct-to-consumer campaigns, promotional events, and global brand partnerships."

The relaunched toyline was revealed at London Toy Fair 2020, before a larger and more elaborate display was shown at New York Toy Fair 2020.

The official website was relaunched in mid-February, with the new kids site set for relaunching in early April; the site was originally intended to launch March 31st at 12am, but the COVID-19 pandemic resulted in a week-long delay.

The new website officially launched on April 10th, 2020 at 10am EDT, marking the first public showcase of the series' new branding. The site and first Discover Chuggington: All Aboard!short were shown in "Milan's Chuggington Site Launch Celebration", a official collaboration between Herschend and The MilanToon Channel on YouTube. Later in the day, an official press release[4] was released announcing its official airdate and confirming a Summer release for Season 6.

After airdates were confirmed via television guides weeks prior, the first promo for the season, now under the subtitle Tales from the Rails premiered Tuesday, June 23rd during the Disney Junior block on Disney Channel.

On July 7th, it was announced that Herschend would be partnering with Union Pacific and Safe Kids Worldwide on a national partnership to promote rail safety. The program commences in August, and will include "a Chuggington-themed PSA campaign, dedicated website, branded in-school safety folders and activity sheets, and social media campaign."

On November 17th, it was officially announced that CBeebies, RTE, TF1, Super RTL, and TVP ABC would be renewing their distribution agreements for the new series, with an "early 2021" target for premieres; "licensing agents across the regions covering key category offerings and product mix, including publishing, secondary toys, puzzles and games, food and drink, sleepwear and apparel, and bedding" are to be announced shortly. [12] TVP ABC in Poland would be the first to premiere the series on December 26th, 2020. The channel would also be the first to air the Celebrate Chuggington special on December 27th, 2020.

The January 2nd UK premiere of the series was lead in with the UK broadcast premieres of Snow Rescue (on Boxing Day 2020) and The Big Freeze (on January 2nd, 2021, less than an hour after the premiere of Slow Coach Koko).

In a presentation for the Alpha Group toyline, an extensive marketing effort for the season was revealed for 2021; in addition to the international premieres and licensing/merchandising rollout, a "Breakout Special Promotion" and Q3 Back-To-School brand campaign titled "Train Together" are planned, with theme park activations and partnerships planned to launch through Herschend Family Entertainment (the Parks and Attractions division of Herschend Enterprises) and Herschend Live (the live entertainment division of Herschend Enterprises).

Nick Hagelin recording for Eddie in the US Dub

Julie Wions recording for Vee in the US Dub 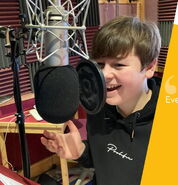 Chuggington at the Alpha Group booth at London Toy Fair 2020

Kids' Website relaunch countdown (as of February 17th, 2020)
Add a photo to this gallery

Retrieved from "https://chuggington.fandom.com/wiki/Season_6?oldid=35052"
Community content is available under CC-BY-SA unless otherwise noted.