Not From Around Here

8
Rosa is a Spanish crane chugger from San Locomota who was introduced in Season 6. Upon her arrival in Chuggington, she was recruited by Zack to become a Chuggineer, of which she now works as one.

Rosa is a chugger with plenty of experience with her work in San Locomota! While she mainly specialises in construction work, she has experience and knowledge in multiple areas, such as using a map to plan a passenger route with how complicated the rail network back home was.

Rosa moved to Chuggington from San Locomota upon learning there were interesting jobs for crane chuggers. The trainees tried to help her find a job she'd like with Koko showing her passenger pickups and Wilson showing her rock-hauling, but neither job seemed suitable for her. When Brewster struggles with repairing a pedestrian bridge in the Depot, she shows him a structural technique they do in San Locomota, which considerably strengthened the bridge. Upon seeing this, Zack invited her to join the Chuggineers, which she accepted with an open crane arm.

Sometime later, she participated in and won the Rock Toss during the Chugtastic Games.

During her first winter in Chuggington, she helped prepare for the annual Festival of Lights, while beginning to feel homesick for San Locomota and their annual winter festival: Noche De Estrellas. Wilson, Brewster, and Koko offered to go with her to visit home for the holidays (with the plan to return back to Chuggington the following day for the Festival of Lights), only to get trapped on the High Mountain Pass. Rosa helped them to get out to safety, but is left depressed after the ordeal and ultimately missing the festival. The trainees cheered her up by not only inviting her to the Festival of Lights, but also holding their own Noche De Estrellas party in the Drop and Load Yard, which touched Rosa and made her glad to be truly home for the holidays.

Rosa, sharing Skylar's model, is likely based on a rail ROBEL work crane truck, commonly used in Europe. She is also similar to a Railpower GG20B, hence her cab design.

Rosa is painted Caribbean green and red paint on her bodywork, and yellow and purple on her crane. Her bogies are black and orange. 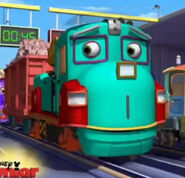 Rosa with Wilson at the quarry 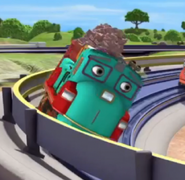 Rosa in front of Hodge on the Chug-A-Sonic Speed Track
Chuggers
Chuggineers
Community content is available under CC-BY-SA unless otherwise noted.
Advertisement