Plarail is a system of motorized trains which are made by Takara Tomy. In 2012, they began production on a motorized lineup of Chuggington toys in Japan. There were plans to release the range in English-speaking territories, but were never fully realized for unknown reasons. Plarail would discontinue the Chuggington range in 2016 following the end of season 5 during the series hiatus.

A tram decorated with Chuggington artwork would additionally be produced. 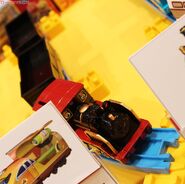 Chuggington Tram
Add a photo to this gallery
Retrieved from "https://chuggington.fandom.com/wiki/Plarail?oldid=40810"
Community content is available under CC-BY-SA unless otherwise noted.