6
Piper is an cab-forward tank steam engine who first appeared in Season 3.

On her first day, she was crowded by all the chuggers as Olwin and Old Puffer Pete arrived with her, and Morgan and Lori steamed her up for the first time. When she started working, Toot was given the job of touring her around Chuggington. Toot wasn't happy with Piper as Piper was taking her space in the Trainee Roundhouse, so went off quickly so Piper would get lost in the depot. As soon as Hoot came back from a run, Toot realized how mean she had been and quickly befriended her. Piper announced to the twins that she wanted to stay in the same roundhouse as Hoot and Toot.

Later, she was given her training plate and Old Puffer Pete gives her her first lesson: How to use her coupler. She struggled with it and thought that she would never be able to do it, but soon learned how to uncouple and decouple. Later, Wilson was put on duty watching her while Pete went up to the Quarry, bringing her to the Chug Wash and got covered in pink bubbles. She ran away from Wilson and tagged along with Chatsworth, also bound for the Quarry. When she realized she couldn't stop on the mountain, Wilson grabbed her and stopped on the Chug Catcher (which he had been struggling with previously). Skylar comments that "Everyone has learned something today, even little Piper!". Upon returning to the Depot, Piper was given training wheels until she was fully ready to work beyond the depot.

Whilst the Chuggineers were building a tunnel, she helped Brewster push a tunnel borer to the worksite with Zephie, Hodge Hoot and Toot. She also came to watch the competing chuggers at the track dash fun race, with Old Puffer Pete. Along with Speedy McAllister, Olwin and Old Puffer Pete, she was due to take part in the Iron Chuggers contest, but got stranded from the group due to a red signal, and derailed when she tried to catch up to them. Jackman came to her rescue but she was forced to pull out from the contest due to the derailment causing damage to her, which eventually led to Brewster being pulled out. During the Chug Patrol Roundhouse evacuation drill, she followed Hoot and Toot's example by misbehaving for Wilson and playing Chug Tag with Zephie, Hoot, and Toot.

One day, whilst playing Chug Tag with the other trainees, the four were sent to collect an important delivery of food from The Docks to the Safari Park. However, with Piper's mind on playing, the journey was very difficult as she frequently lost focus and went off to play. The trainees finally get her to focus by using reverse psychology on her; they make up a game where Piper needs to get to the Safari Park with a wagon first before "The Chasers" get her. With this, the job was finally completed, with Piper's very first delivery being made alongside it!

Piper is very young and that makes her very inexperienced. She struggles to train, but if she tries very hard, she can do it in the end. She is quite disobedient and sometimes doesn't do what she is told. However, she soon put this right when she went up and down the mountain. She is very friendly to younger chuggers and is very forgiving, like when Toot left her in the busy depot.

Piper can also be quite playful, much like a small child, and easily distracted. When she was tasked with helping Wilson, Brewster and Koko deliver some cars to the Safari Park, all she wanted to do was play with them, resulting in the three older chuggers making their work into a game for her!

Piper is based on the North Pacific Coast Railroad Cab-Forward 4-4-0 No. 21 "Thomas-Stetson", a rebuild of NPCRR #5 which had been wrecked in 1897. An innovative engine built by Bill Thomas, it is considered the first cab-forward locomotive and was one of the first oil burners, as well as the first locomotive to use a marine boiler. Unlike her basis, Piper lacks a tender and a cowcatcher on the front and is narrowed down to a 4-2-0.

Piper is painted orange and pink with a black cab roof, and gray wheels. 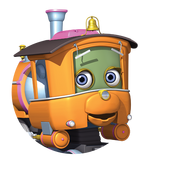 Piper getting her wheels oiled

Piper speeding down the mountain track

Piper playing with Hoot and Toot (while Wilson is watching)

Piper looking at something

Lori and Morgan inside Piper

Piper with her best friends: Hoot and Toot

Hoot and Toot playing with Piper

Piper Find a New Round House

Piper amongst other chuggers

Piper heading into the depot

Piper with Wilson, Brewster, and Koko at the docks 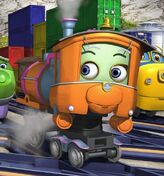 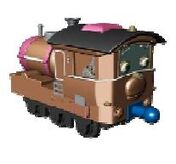 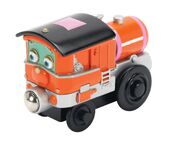 Wooden
Add a photo to this gallery
Chuggers
Chug Patrol
Retrieved from "https://chuggington.fandom.com/wiki/Piper?oldid=35004"
Community content is available under CC-BY-SA unless otherwise noted.