8
Payce is an Japanese tunnel runner from Tootington who runs the High Speed Link.

While the Chuggineers were building Brewster Bridge, Payce came to watch. She introduced herself to Brewster and explained that she was a tunnel runner. Brewster told her about Koko who was also interested in becoming a tunnel runner. She left Brewster when the Chuggineers called him over. Later, she came to see Hanzo and Koko and run on the Chug-a-Sonic Speed Track. She recorded a time of 6:00 clickety clacks. Koko was upset, but Payce was nice to her and said that she should have fun going fast. She then challenged her to a race, but Payce could only go backwards. She triede to make it fun for Koko and as a result, Koko broke her record of 9:00 clickety clacks and got a time of 8:00 clickety clacks. When the Tootington Tunnel was complete, she was the first to use the High Speed line to Tootington, carrying both the Mayor of Chuggington and Tootington. She took Koko on the High Speed link to Tootington while they dropped off containers there during the Iron Chuggers contest. On their return, they saw Brewster who needed to get to the contest as quickly as possible. They both coupled to him, and went as fast as they could to the contest where Brewster lead the Chuggineers to victory.

Most likely based on the Shinkansen E3's prototype.

Payce has not appeared on the show since 2015. 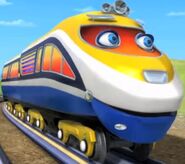 Payce's Basis
Add a photo to this gallery
Chuggers
Speed Fleet
Retrieved from "https://chuggington.fandom.com/wiki/Payce?oldid=37598"
Community content is available under CC-BY-SA unless otherwise noted.