Olwin is a British steam locomotive who is very wise and kind.

Olwin is the most motherly of all the Chuggington characters. Olwin likes to keep her paintwork looking pristine and would rather not be asked to complete dirty tasks. She is happy to help the trainees but sometimes embarrasses and babysits them by calling them “little chugg-a-chuggs”. Olwin is a well-respected engine and is always there when a chugger is in need of a ‘bumper’ to cry on.

Olwin is similar to a tender-less LNER Class A4 locomotive. When she collects coal, it is deposited through an opening in her cab roof, and water is stored centrally in the boiler, similar to Speedy McAllister.

Olwin is painted dark green with bluish-green linings, and an orange cab roof and funnel. Her wheels are painted in varying shades of gray. 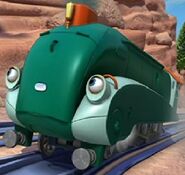 Mallard, a preserved example of Olwin’s basis (excluding the corridor tender)
Add a photo to this gallery 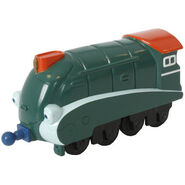 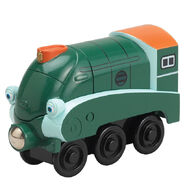 Wooden Olwin
Add a photo to this gallery
Retrieved from "https://chuggington.fandom.com/wiki/Olwin?oldid=30615"
Community content is available under CC-BY-SA unless otherwise noted.