Lost media is a term used for anything ranging from films, books to video games that is inaccessible to the public in its entirety. Chuggington has had its fair share of lost or cancelled episodes, characters and more.

The Pilot is a two-minute test that was produced by Shanghai Motion Magic Digital to pitch the series to the BBC. Nothing is known about the pilot other than its runtime and that it was a success. Despite popular belief, the first aired episode, Can't Catch Koko is not the pilot, proven by the fact that it is the sixth episode in production order evident by test sketches from Paul Couvela.

Despite no footage of the pilot existing, some early promotional images show slightly earlier versions of Emery (with smaller eyes of inconsistent sizes), Old Puffer Pete (with an open-ended cab) and the track design.

The third season of Chuggington was originally proposed to be much more ambitious than the final product. Original plans for the third season consisted of twenty-six episodes, better animation, seven new characters and lots of new rolling stock. Unfortunately, as the season entered production, several investors pulled out of the series, leaving Ludorum with little money for the season. In the end, the season would consist of fourteen episodes and three new characters. The mediocre outcome of the season would result in the major reworking of the series for the next season.

Not much is known about the twelve cut episodes and four other characters planned for the third season. However, it is known that Decka's introductory episode was among the cut episodes.

Chuggington: Badge Quest is a four-minute sub-series of Chuggington focusing on the trainees completing tasks to earn their badges.

Due to the series never receiving any dedicated DVD releases, a number of episodes are now lost and have not been accessible outside of the series' Amazon Prime UK release since their original airings, meaning several episodes of the American dub are completely lost. Thirteen more episodes of the series were additionally announced for release in the autumn of 2013, but were cancelled- likely due to most of Ludorum's funding going towards the heavily marketed Season 4.

High Speed Action: Koko, Hanzo and the Speed Fleet and Rescue and Repair: The New Chug Patroller were the planned 2015 and 2016 specials respectively. The existence of the specials was discovered by the user CalleyFan in a fourth season licensing presentation from early 2013 that was made public for a short while.

Nothing is known about the specials, but it is speculated that they were intended to be released alongside a possible early version of Season 5. The specials were cancelled and most likely replaced with Delivery Dash at the Docks and The Big Freeze, as a result of the fourth season's poor performance leading to the fifth season being downsized.

The second season of Chuggington: Little Trainees premiered sometime during late 2017 to early 2018, consisting of twenty-six episodes using footage from the first five seasons- edited to appeal to a slightly younger audience. The second season of the series would be the final, with Herschend Entertainment Studios purchasing and subsequently liquidating Ludorum shortly after its release.

The second season of Little Trainees would be available on DisneyNOW for some time before being removed from the app. While the British dub of the season is still available on Amazon Prime UK, the US dub remains lost due to it receiving no DVD or digital download releases in America.

Chuggington Virtual World Tour was a short-lived online game developed by Red Knight Games that could be downloaded from the official website. The game allowed users to become a trainee and perform tasks around the Depot and beyond. The game was opened for private preview on the 19th of January, 2009, with it opening to the public later that year. The last update would be around April 2010, with the server for the game shutting down sometime afterwards, rendering it unplayable.

In mid-2020, the game's trailer would be discovered on the first version of the DVD Let's Ride The Rails!, with more footage being discovered on the YouTube channel thomastrain132. The file for the game is known to still exist, and while it cannot be used, its history has not been forgotten.

Possible promotional image from the pilot 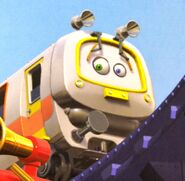 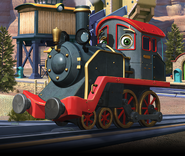