8
Jackman is the head of Chug Patrol. He was introduced in Season 4.

Jackman joins Chuggington in Series 4 as the chief of Chug Patrol and the bravest chugger on the tracks! With a twinkle in his eye and strong leadership skills, Jackman makes the perfect mentor for Wilson, who aspires to follow in his tracks! He is friends with Calley.

Jackman is likely to be based on an ICM Koploper. However, in the show, Jackman is diesel powered, whereas the real ICM Koplopers are electrically powered.

Jackman's possible basis
Add a photo to this gallery

Jackman is painted red with a navy underbite, red and yellow caution stripes on either side of his underbody, and navy and light sky blue lining. His window frames are white. 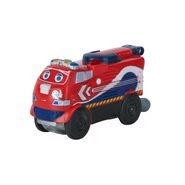 Add a photo to this gallery
Chuggers
Chug Patrol
Retrieved from "https://chuggington.fandom.com/wiki/Jackman?oldid=34279"
Community content is available under CC-BY-SA unless otherwise noted.