Koko and the Tunnel

Irving is a medium-sized dark red diesel engine who handles the recycling chores around Chuggington.

Irving handles the recycling and garbage. He has a recycling area off of the main depot. Irving may look a little snappish, but he can be very helpful to others. He is an adult chugger with a perfectionist streak. He is also very proud of his work at the Recycling Center, and boasts that nothing is ever thrown away in Chuggington. He often speaks in third person, and is also strict when things go bad.

Irving is based on a Beilhack Rotary Snowblower, minus the plow on the front and modified with two sweepers.

Irving's Basis
Add a photo to this gallery

Irving is painted dark red with a light gray cab roof and a dark gray underbody. He has caution stripes on the corners behind his engine area. His window frames are painted light gray.

Irving has not appeared on the show since 2015.

Concept art (orthographics)
Add a photo to this gallery 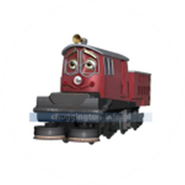 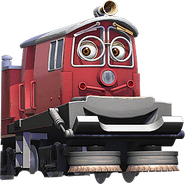 Irving with Harrison and Chatsworth

Irving next to Koko 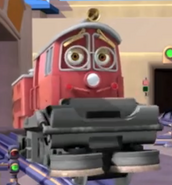 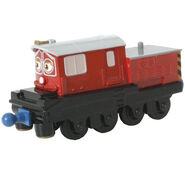 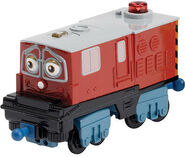 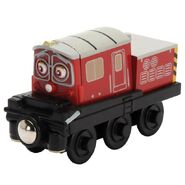 Chuggington Motorized
Add a photo to this gallery

Chuggers
Retrieved from "https://chuggington.fandom.com/wiki/Irving?oldid=33448"
Community content is available under CC-BY-SA unless otherwise noted.