Wilson Gets a Wash

After getting loaded with old bricks, Hodge complains that he's treated like a baby by Eddie due to many of his tasks being helped with, many times against his will. He wants to do future jobs by himself and then takes the bricks to the recycling center. While en-route, he is startled by Wilson playing a joke and accidentally drops the bricks, badly damaging a Junction box in the process. The box breaks open, exposing wires and it's electrical transformer.

A few seconds later, major electronic glitches occur in Chuggington: firstly, Vee malfunctions while Puffer Pete is about to be sent to the Safari Park to deliver a load of bananas, but instead receives faulty directions including wrong tunnel colors and the destination being the farm. Koko witnesses the glitch, believing Vee's broken, and goes to get Eddie to fix it.

Meanwhile Wilson helps Hodge clean up the bricks when they notice the Junction electrical box bleeping and shut the doors with the crane; all with Hodge and Wilson claiming that's it's fixed and Hodge tells Wilson to not to tell Eddie about the accident, in fear of being grounded. However, further glitches occur elsewhere: after Vee gets fixed by Eddie, Chatsworth reports that signal lights and track switches keep changing and constantly redirects him back to the depot; Emery is delayed due to a signal light stuck on red; Dunbar's turntable unexpectedly spins out of control at the training yard; the chugwash and lights come on strangely; and Olwin gets redirected from the zoo to the steel mill foundry.

After the turntable is fixed, Dunbar notifies Eddie to check the junction boxes, which turned out there's 348 of them. Wilson learns of the cause of the electrical problems, and tells Hodge about the escalated situation, and that it can only be resolved if he tells Eddie about the accident despite his worry of being treated like a baby. Hodge acknowledges his accident to Eddie and he fixes the broken junction box transformer at the brick crash site.

Hodge and Eddie make a deal that he can do tasks on his own, but must remember to notify Eddie of any accidents or problems. All the glitches problems have been fixed and Hodge no longer feels like a baby. 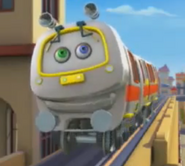 Emery (announcer's voice): We apologise for the long delay.
Add a photo to this gallery
Retrieved from "https://chuggington.fandom.com/wiki/Hodge%27s_Secret?oldid=35698"
Community content is available under CC-BY-SA unless otherwise noted.