Hodge is an American Dandy (dog)-Diesel that lives in Chuggington. His name comes from the fact that he was built from a hodge-podge of parts - basically refurbished metal from the scrapyard.

Hodge is partly one of the younger Chuggers, just a few years older than the Trainee's Brewster, Wilson, and Koko. He is a pick up Chugger who is always there to help out with any job big or small. Hodge spends his days running around the repair yard in Chuggington running errands for Eddie the Handyman. He has a "seen it all" attitude to most things and it takes a lot to get him excited. He hates being marginalized by Eddie, this is most evident in Hodge's Secret.

He is a very wise chugger, and occaitionally offers advice to the trainees.

Although Hodge is not based on any actual locomotive, he resembles one of early modified rail Mack AC trucks. He is described in one episode by the mayor's son as being a "6-wheeled dandy half-engine". He has a vague family resemblance to a wide range of railway cars built in a number of local railway company shops from a mixture of automobile, bus, truck and railway car parts. Likely inspiration came from the USA's Rio Grande Southern "Galloping Goose" series of contrivances. Of the three preserved RGS "Galloping Goose" series of cars, Hodge most closely resembles RGS #6 (which has a flat bed truck frame on its rear) but with the stove pipe of RGS#7 (used for heating the passenger compartment - which on RGS #7 was partly created from wooden passenger coach parts). Hodge also lacks the vast snowplows used on the RGS machines. However, many such shop-built contraptions were assembled and used by small budget railway companies throughout the world, and each of them were uniquely built for local needs using parts on hand. Hodge, like his ancestors throughout the world, is a locally designed and built machine, created from whatever parts happened to be available, to meet specific needs of his railway. 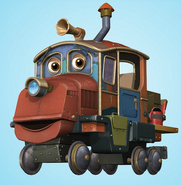 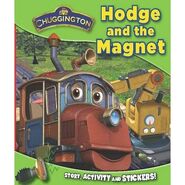 Hodge's Basis
Add a photo to this gallery 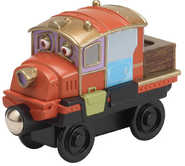 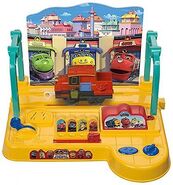 Plarail
Add a photo to this gallery
Retrieved from "https://chuggington.fandom.com/wiki/Hodge?oldid=29536"
Community content is available under CC-BY-SA unless otherwise noted.