Emery is a rapid rail subway train in Chuggington.

Emery is an electric rapid rail Zeppelin that zips all over town. Sometimes he travels underground, and other times he passes overhead on elevated tracks, also known as Emery's line. He often shoots through the main depot on his way somewhere with a quick joke. As he whizzes past, mischievous Emery will tell an unsuspecting chugger that their wheel is rolling off, they are leaking fuel or that they've forgotten their rolling stock, and with that he is gone. He can be known to take his jokes a bit too far, and sometimes a subtle bully by setting up the trainees for failure. Despite all this, he is a friendly and caring chugger.

Emery is based on the Osaka Metro 20 series Japanese train. 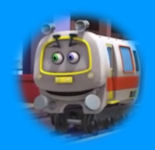 Emery at the fireworks 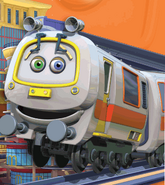 Emery with both eyes in blue. 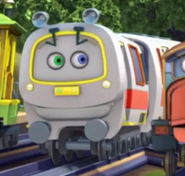 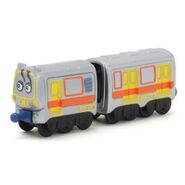 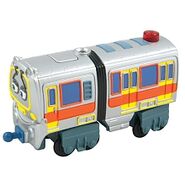 Jazwares
Add a photo to this gallery
Retrieved from "https://chuggington.fandom.com/wiki/Emery?oldid=30604"
Community content is available under CC-BY-SA unless otherwise noted.