10
Cormac is a rail forklift truck who works at the drop and load freight yard and is the new owner after taking over from Old Puffer Pete, who works at Rocky Ridge Quarry as of Season 6.

Cormac is very cheeky chugger who enjoys pulling small practical jokes on the chuggers but he never takes his jokes too far and always tells the chugger if he has played a practical joke as well. He is very supportive and always works hard to complete his work, even if he has to take a break very often.

In his first appearance, he helped Brewster take the last section of the Tootington Tunnel to the worksite. The load was very wide so they had to use two flatbeds and work side by side. However, Cormac got tired and as they went round a bend, then tunnel section fell off and rolled down the hill. Brewster and Cormac had to chase it and then catch it just at the right moment. Then they happily took the tunnel section to the worksite and the tunnel was complete. He was present during the Iron Chuggers contest and set up the wagons with the weight that Speedy and Zack wanted.

Cormac is of a freelance design. Therefore, he is not based on any specific prototype.

Cormac is viridian with some thick yellow stripes. His bottom jaw, buffer beams and cab roof is yellow too and he has an orange siren light. 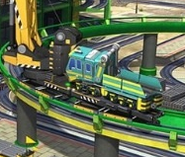 Cormac hanging from his crane
Add a photo to this gallery 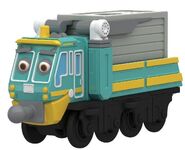 StackTrack with forklift opened up 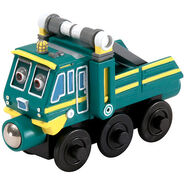 Wooden Railway
Add a photo to this gallery
Chuggers
Retrieved from "https://chuggington.fandom.com/wiki/Cormac?oldid=33131"
Community content is available under CC-BY-SA unless otherwise noted.