Chuggington is a large fictional city and the setting of the series. It was once an older place, but was left and moved to a more technology-friendly place.

It's location in the world is unknown, but most likely Africa, that has many biomes from other parts of the world, for example the Grand Canyon (where the quarry is - based of the landscape of Arizona, US), the safari park - comprised of African savanas, English plains, Canadian forests, and the docks.

The city center houses the main depot, and has been expanded in later seasons and episodes. The complex has an office building complex, where the Mayor works, consisting of various levels of elevated flyover track; whilst the familiar depot area is more flat and spread out.

Wilson at the Depot 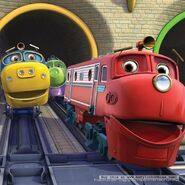 Chuggington.jpg
Add a photo to this gallery
Retrieved from "https://chuggington.fandom.com/wiki/Chuggington?oldid=27486"
Community content is available under CC-BY-SA unless otherwise noted.