Chug-o-Flage is the 4th episode of Season 3.

The trainees are trying for their Advanced Safari Badges, and to do this, Mtambo has to get them closer to the animals. Morgan puts a net around every trainee to put leaves and sticks on to, to camouflage as a bush. But when Brewster and Koko take all the leaves and leave none for Wilson, and Wilson's net falls off, he decides to have sprayed on camouflage like Mtambo! Meanwhile, Mtambo decides that they can't wait for Wilson anymore. He takes Koko and Brewster to see all the animals and waits for Wilson to catch up. After seeing the giraffes, Mtambo takes the two to see a rhino. Brewster is worried about it attacking, but Mtambo reassures him that he won't charge unless it feels threatened by loud noises and fast movements. Meanwhile, Wilson is driving around the Safari Park scaring all the animals. Mtambo sees the animals all running, and he and Dr. Gosling calm them down, leaving Brewster and Koko with the rhino. Just then, Wilson roars in, painted as a parrot, and is screaming like a bird. The rhino sees and hears this, and starts to charge on Wilson. Wilson drives away, with Koko and Brewster following. They trap the rhino at the tunnel. Brewster and Koko scolds Wilson for scaring the animals. They also told him that birds are not the size of chuggers. Wilson was shocked and felt very terrible. Wilson decides to take a camouflage net covered in leaves, and have the rhino eat the twigs and leaves and lure him back to the Safari Park. Mtambo thanks his cleverness, then next time he will catch that rhino. And Wilson gets his bagde. But when Wilson asked if Mtambo thought that the trouble was made by a parrot the size of a chugger, Mtambo tells Wilson not to be so silly! 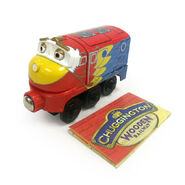 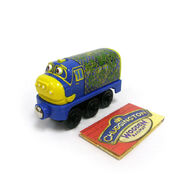 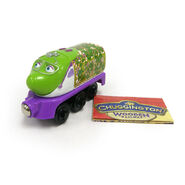 Wooden Camouflage Koko
Add a photo to this gallery
Retrieved from "https://chuggington.fandom.com/wiki/Chug-o-Flage?oldid=26757"
Community content is available under CC-BY-SA unless otherwise noted.