Chatsworth is an American diesel Chugger who was introduced in Season 1.

Chatsworth is an older well-spoken train who generally performs the same tasks as Harrison. Being well mannered and polite is very important to Chatsworth. He is a very proud chugger and is always in tip-top condition as he feels it's very important to be looking your best. Always one to offer a few words of advice to the trainee's as he chugs around Chuggington on his important duties, Chatsworth considers himself definitely one of the upper crust of chuggers in Chuggington, but he is not a fool. He is always considerate. He always wants a rest or a nap since he often gets tired. He can sometimes be a bit spiteful though.

Chatsworth is based on a Baldwin Sharknose Locomotive, Baldwin RF-16.

Chatsworth is painted white, with red and silver linings. His porthole, window frames, and vent frames are painted red.

Chatsworth on the raised turntable 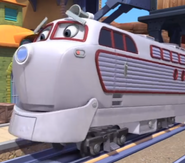 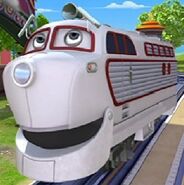 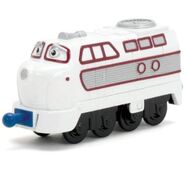 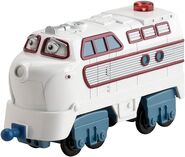 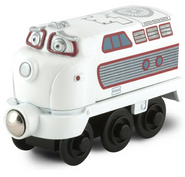 Chuggington Plarail
Add a photo to this gallery

Retrieved from "https://chuggington.fandom.com/wiki/Chatsworth?oldid=30711"
Community content is available under CC-BY-SA unless otherwise noted.