Calley is a small German shunting engine who is Dunbar's and Jackman's assistant as well as the rescue chugger.

Calley has her own set of service cars to perform her many different tasks. For example, with a fuel car attached behind her, she is able to refuel the chuggers. In the event of a fire, she has a fire service car with hoses to put out the flames. If a chugger ever breaks down, then Calley is also the rescue chugger to help out. She loves to use her flashing yellow warning lights when she's out on an emergency. Below Calley's Underground Shed is an underground chamber containing all her rolling stocks. In the event of an emergency, she is lowered underground to a turntable, so that she can quickly hook up to her rolling stock, before shooting off through a network of tunnels that take her under the city that is now replaced with Chug Patrol Headquarters where she works with Jackman.

Calley is loosely based on a Krauss-Maffei ML 500 C diesel hydraulic shunter which were built in Germany.

Calley is painted orange with a dark green cab roof. 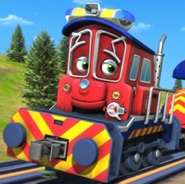 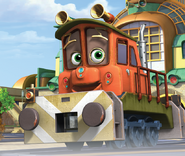 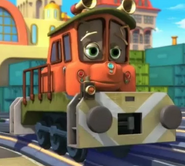 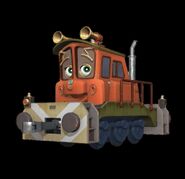 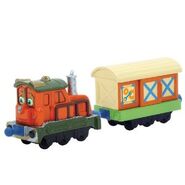 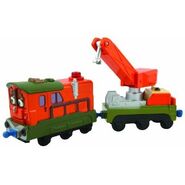 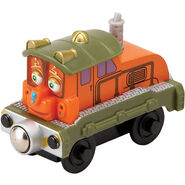 Plarail
Add a photo to this gallery
Retrieved from "https://chuggington.fandom.com/wiki/Calley?oldid=30712"
Community content is available under CC-BY-SA unless otherwise noted.