Zephie is very keen to do some work. So when Vee gives Brewster his jobs for the day, Zephie wants to help him. But, Brewster teases her as she is too small to handle heavy freight trains. This makes Zephie cross and she decides to be Brewster's Little Helper to prove that she can pull freight. So, she collects a van and heads for the Farm whilst Brewster has a Chug Wash.

Soon, after his wash, Brewster starts his work, unaware that Zephie is doing his work. As a result of Zephie's muddle with the deliveries, Brewster causes a greater muddle by taking the eggs back to the Farm. Felix tells Brewster to take them to the Ice Cream Factory, which he does. Then, Brewster collects the animal feed and takes it to the Farm. Brewster arrives very late at the Mountain Quarry, only to realise that there's only a few boxes of tiles left. Karen tells Brewster about Zephie helping him, which makes Brewster realise that Zephie made the muddle with his deliveries. Once the remaining tiles are in his van, Brewster sets off.

Meanwhile, the van load of tiles is much too heavy for Zephie to handle and she and the van come off the rails. Brewster arrives and apologises for teasing her, but he reminds Zephie that all engines are designed for different jobs. Once Zephie is back on the rails, she and Brewster go back to Chuggington where Morgan and Lori have being wating all day for Zephie as they've got plenty of jobs for her. Now, Zephie knows that she doesn't have to do the jobs of the bigger engines to prove herself useful. 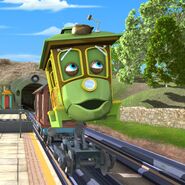 Add a photo to this gallery
Retrieved from "https://chuggington.fandom.com/wiki/Brewster%27s_Little_Helper?oldid=35634"
Community content is available under CC-BY-SA unless otherwise noted.