Braking Brewster is the third episode of Season 1. But the fifth episode in production order.

Wilson and the Elephant

Koko and the Tunnel

Brewster and Wilson collect some hopper wagons to take to the Quarry. After some practicing with the hopper doors, Dunbar tells them that it is harder going downhill with a heavy load, so they must go slowly, and only Wilson listens, with Brewster not paying attention. After leaving the depot, Wilson accidentally takes the right tunnel which goes downhill when they should've taken the left tunnel as Vee told them. Upon arrival at the Quarry, Wilson is struggling to keep the hopper doors shut, so Brewster kindly lets Wilson have some more practice whilst he fills up his hopper wagon. Brewster takes all the rocks leaving Wilson to take the dust. Once their way home, Brewster doesn't listen to Wilson instead Brewster thinks Wilson is just talking nonsence but Wilson tries to tell him what Dunbar said earlier which is true. But, Brewster starts going too fast due to his heavy load of rocks. Luckily, Wilson gets in front of Brewster and opens his hopper doors to release the dust, which Brewster brakes on giving him grip on his wheels again. Wilson tells Brewster that he remembered Morgan using sand to give him grip on the slippery oil and Brewster apologises to Wilson for not believing in what Dunbar said to him, and then, they get back home safely. 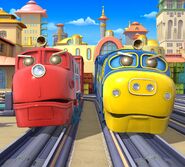 Add a photo to this gallery
Season 1
Retrieved from "https://chuggington.fandom.com/wiki/Braking_Brewster?oldid=34469"
Community content is available under CC-BY-SA unless otherwise noted.